Welcome to the Scrapbooksteals October blog hop! Scrapbooksteals is my favorite place to go for scrapbooking ideas and supplies. Hope you've enjoyed hopping along and seeing all the amazing projects.

I was thrilled to get the chance to work with the My Mind's Eye Titles, Quotes and Die cuts mega pack.  There is SO much included in this pack the ideas starting flowing immediately! The first thing I wanted to work on is my project life. As usual I'm a few weeks behind but I got right to work on week 32 and this mega pack made the page come together so easily! It was perfect for sprucing up a few plain grid cards. 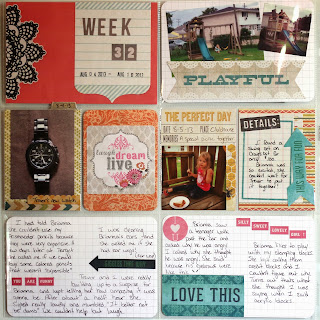 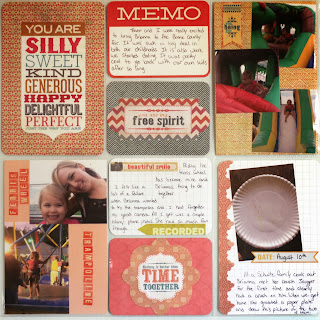 After finishing my project life spread I made a handful of cards. The My Mind's Eye Titles, Quotes and Die cuts make cards so easy!! I love to have quick pre-made cards ready to go. 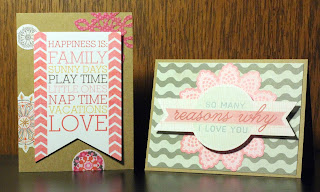 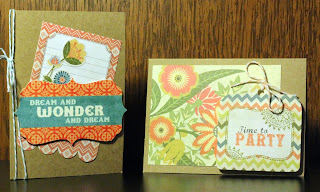 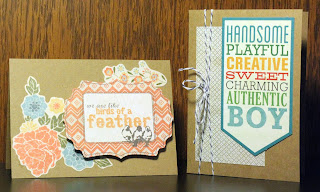 Scrapbooksteals is giving away a $20 gift certificate to one lucky hopper so if you didn't start there make sure you go back to Scrapbooksteals.com and make your way through the blog hop.

Welcome to the Kiwi Lane Designs May blog hop! I hope you're finding lots of inspiring ways to use your designer templates! I was lucky enough to receive the Scallop templates to work with.

I knew I wanted to create flowers with the templates and with spring having FINALLY arrived in northern IL, I decided to make a spring wreath for our front door. 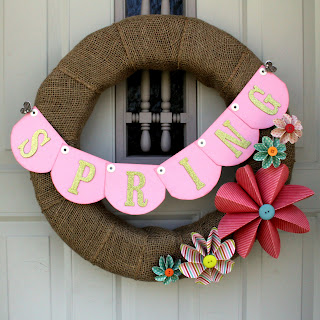 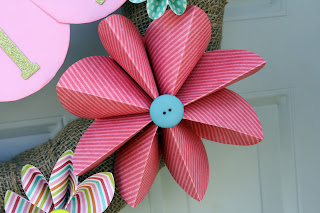 I used the three different sizes to create my flowers and even used the large scallop to create the spring banner. I love the way it brightened up our front door! Although soon after taking this photo my three year old claimed it for her bedroom door!

Now for the fun part! A random winner from ONE of the 10 blogs (including the Kiwi Lane blog) will be given a $25 gift certificate to the Kiwi Lane shop just for leaving a comment! So make sure you hop along to each stop!

I finally found the time to participate in my very first Lawnscaping challenge! I haven't been stamping long but Lawn Fawn stamps are the reason I started. They are so cute and such high quality! 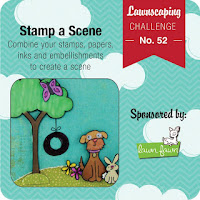 I made two cards for the challenge, the first one is a clear indication that I am over the snow of the midwest! 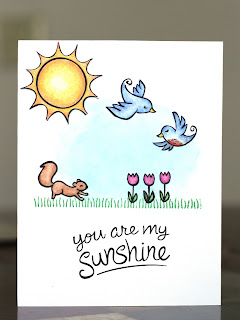 I used my prismacolor pencils to color each stamped image and then fussy cut them to put my scene together. What I wouldn't do for some sunshine right now instead of the snow storm I see outside my window! 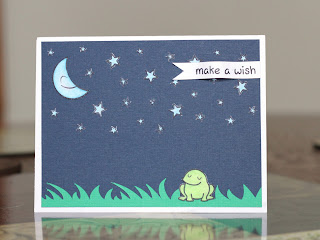 I kind of love my second card. I'd have to after fussy cutting all those stars! It's simple but it turned out just like I wanted. Of course I used my prismacolor pencils again to color everything. I love those pencils!

Wish me luck in the challenge! Thank you for stopping by.
Posted by ErinJean at 12:20 PM 8 comments

Week 6 started out rough for us. Trevor left Sunday to go back to OK for six weeks. He had to take a Greyhound bus and took more than 24 hours to get home. 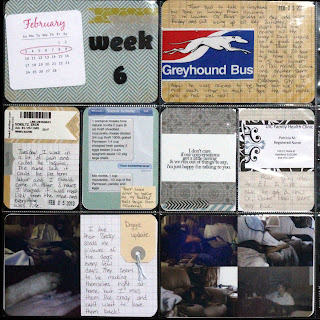 I had a visit to the ER Tuesday. I was having some pretty serious cramping and was told to come in to be monitored. Everything was fine thankfully. Probably just stress from the move.

I added a quote I found on Pinterest it reads, I don't care if our conversations get a little boring & we run out of things to say, I'm just happy I'm talking to you. It says exactly how I feel about my conversations with Trevor right now. I also included all the photos I received of the dogs that week. 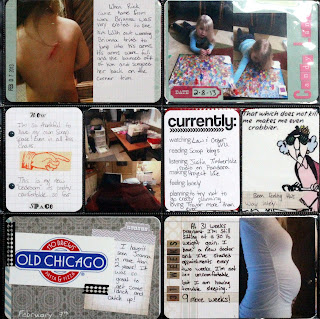 On the right side of my spread I have a picture of a nasty scratch Brianna got just a few days after we got here. The rest are random pictures from our week, playing Candy Land with Brianna, photos of our new living space, the Old Chicago logo because we had lunch there with a friend I hadn't seen in years.  I love the little comic, it says, that which does not kill me makes me even crabbier! Of course I ended the layout with my weekly pregnancy update. 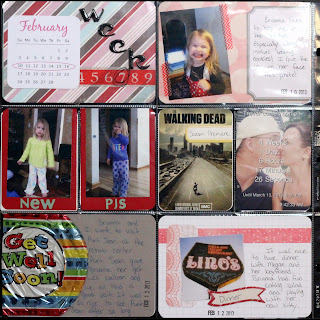 On the left side of week 7 I have a picture of Brianna's chocolate covered smile when she was helping me bake cookies. Get used to seeing that screen shot of Trevor and I kissing! It's an app on my phone that I set up with a countdown to when Trevor will be here. I plan to include a screen shot of it each week. We got the chance to go see my great Aunt who is currently at a rehab center and will hopefully be going home this week! Brianna and I also went to dinner with my little cousin Megan. 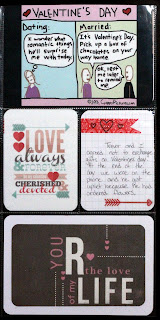 I added an insert this week, the first side some random Valentines day things. Also a little note about how Trevor tried to send me flowers but apparently forgot to confirm his order. He was so upset that I didn't get them! 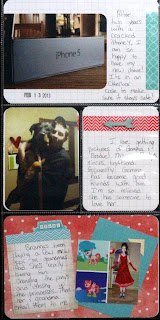 On the other side of the insert I have a picture of my wonderful new iPhone 5! A quick update on the dogs with a photo of Gemma, and a few snap shots of Brianna's favorite new apps on grandmas iPad. 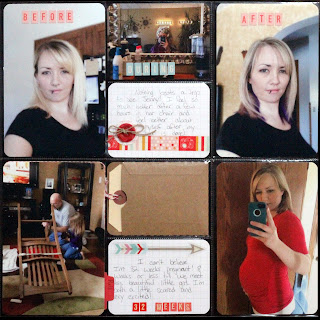 The right side was a little hard for me. I have trouble using my design D page protectors but I'm trying to include them every once in awhile. I'm also not super comfortable including so many photos of myself but I'm trying to get over that. I included a before, during and after of my hair. The photo in the bottom left is Brianna and her grandpa. There is a QR code to a video tucked behind it. Brianna was helping grandpa fix the dinning room chairs. And of course ending the spread with my 32 week pregnancy photo!

Hope you enjoy the peek into our daily life. Thank you for stopping by!

Week 5 was a very busy week for us! It was my birthday, our seven year anniversary, and mine and Brianna's move up to IL. 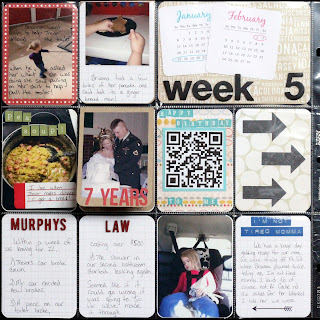 The left side of my spread includes a handful of funny stories about Brianna and the cute things she says. The QR code goes to a video of Brianna singing happy birthday to me. There's also a few journaling cards about everything that went wrong while we were getting ready to move. Believe me if it could go wrong it did! 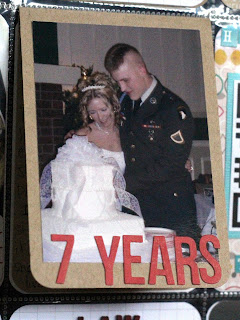 I also included a fold over flap with a wedding photo for our seven year anniversary. Inside is some journaling about how much Trevor means to me and how happy I am that after seven years he's still my best friend! 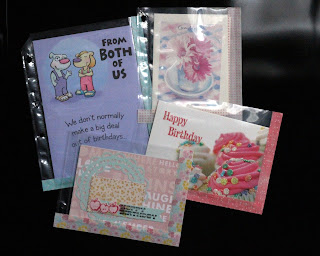 I wanted to add my birthday cards but they were all different, odd sizes so I cut down 8.5x11 page protectors and sealed them with washi tape. They fit very nicely in my album. 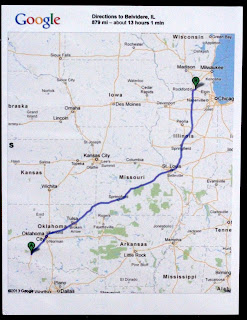 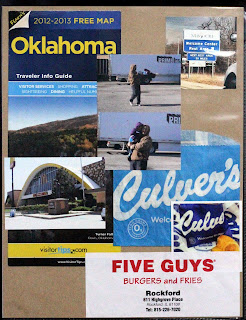 I added another insert to include a google map image of our trip from Lawton OK to Belvidere IL. On the other side I made a sort of collage of pictures and items from our trip. 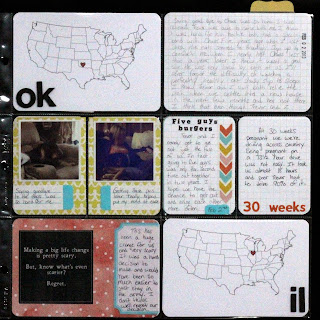 And finally on the right side I have two maps showing where we began our week and where we ended it. We also had to put one of our cats to sleep and the top right pocket is about him and how hard it was to say good bye. I plan to add a photo I just can't find the right one with all the craziness of the move. I also put in photos of the dogs at their temporary home. I'm so glad they are adjusting well! No pregnancy photo this week as we drove from 10am Friday morning to 3am Saturday, then continued our crazy weekend after only three hours of sleep!

So that was week 5 for us. Very busy, very crazy, and lots of inserts! Tomorrow I'll bring you weeks 6&7. Thank you for stopping by!
Posted by ErinJean at 7:19 PM 1 comments

It's been a crazy few weeks and although I've managed to stay on top of project life I haven't managed to keep up blogging about it. So over the next few days I'll be playing a little blog catch up to show you what I've been doing the last few weeks. 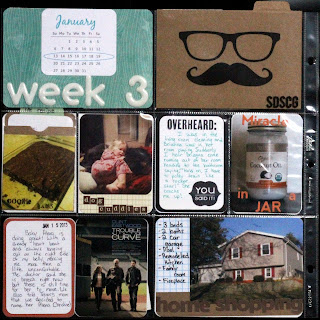 The glasses and mustache folder represents a close group of friends and some personal journaling about how much they mean to me. The house in the bottom right is just one that we have been looking at online. I'm enjoying house shopping since I didn't get to help pick our first house!

I included a small insert this week. We had been so busy packing and getting the house ready, we took a short break to enjoy the beautiful weather. 57 degrees in the middle of January? It was beautiful! 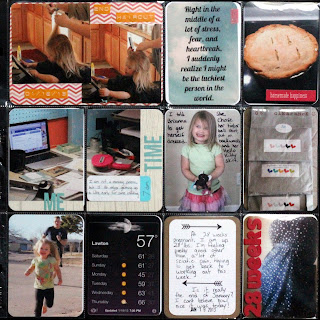 This side of my spread includes, me giving Brianna a hair cut, what was left of my scrappy space as we packed, and my belly at 28 weeks. 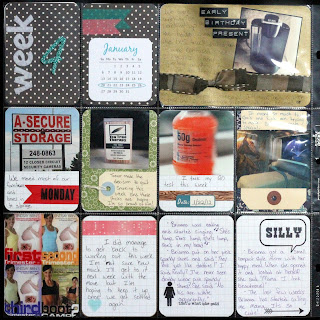 Trevor surprised me with a Keurig as an early birthday present. I used the wrapping paper and ribbon from the package and included the picture of the Keurig. I also included a list of funny things Brianna said through out the week. Definitely stuff I want to remember in ten years! 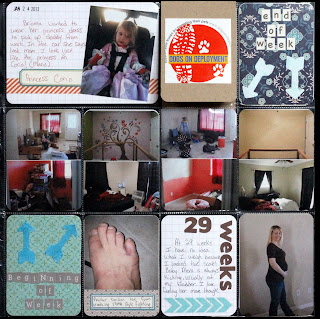 On the other side I have before and after shots of the house as we painted and packed, a pic of Trevor's toe. (His second broken toe in two months!) And of course my weekly pregnancy photo. 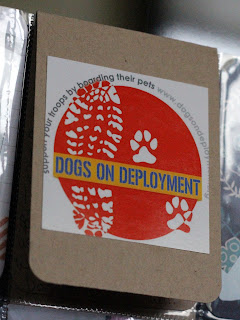 Here's a close up of a little flap I included. It gave me a little extra room to include more journaling. I really like using these in my weekly spreads!

So that was our week 3 and 4. I'll be back again tomorrow with week 5! Thank you for stopping by!
Posted by ErinJean at 11:17 AM 0 comments

I'm having so much fun with Project Life! As busy as life is right now it feels so good to still find the time to create. So here is week 2, 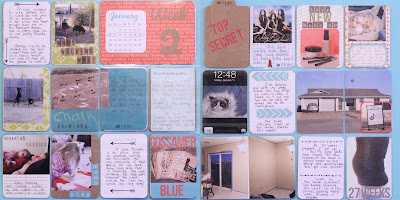 I love that I'm documenting all the little details of our daily life. The funny things Brianna says, the exciting (secret) news my best friend shared with me, and all the big changes happening in our lives right now. Thank you for looking!

ErinJean
I am a 27 year old stay at home mom to my little girl, Brianna and I've been married to my high school sweetheart for 6 years. I've always enjoyed crafts of any kind but since finding scrapbooking it has become my passion!